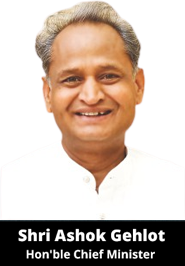 Jaipur Metro is a rapid transit system in the city of Jaipur, Rajasthan, India. Construction on the mostly elevated part of the first line, called Phase 1A, comprising 9.63 kilometres (5.98 mi) of route from Mansarovar to Chandpole Bazaar, started on 13 November 2010. After receiving safety clearance from Commissioner of Metro Rail Safety (CMRS) in May 2015, Jaipur Metro began commercial service between Chandpole and Mansarovar on 3 June 2015.The Jaipur Metro Rail system is India's sixth metro rail system after those in Kolkata, Delhi NCR, Bangalore, Gurgaon and Mumbai. It is also touted as one of the fastest built metro systems in India.Jaipur Metro is the first metro in India to run on Double-storey elevated road and Metro track.

Coaches in Each Metro Train